Three Wise Men they are not…but stars from the hit musical Les Misérables they are!

Twas a time before Christmas, three musical singers
Joined forces in song to pay for their dinners
Their voices were tuneful and the banter was funny
Singing all of the show-tunes for not that much money! 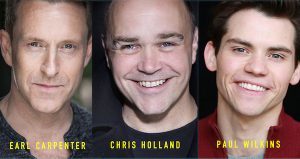